Need a conveyancing service done right the first time in Hervey Bay?
Get a no hassle, on time settlement with your emails & calls promptly returned.
LEAD Conveyancing is the only property law firm with a guaranteed fast response time.
Communication & responses within 48 business hours, guaranteed* or we’ll deduct $100 from your professional fee (no questions asked).
Care from a Queensland Law Society registered law practice at an affordable cost.You get a Lawyer from A to Z (Kristy Fletcher). Not a legal clerk.
Extra care & hand-holding for First Time Hervey Bay Buyers and Sellers. Legal advice and support throughout the process. Not just paper pushing.
Fill in the form or call 1800 532 326 for a FREE quote

What Our Client Say About Us

When looking for the right conveyancing firm, you will see a lot of options.

Solicitors, conveyancers, companies, local firms, freelancers – each of them has its own differences.

How do you choose the right service? What should you look for? What are the things you should beware of? Here’s a list to help you out so you can make an educated decision.

Find someone who has the following:

At LEAD, you get all of them – fixed legal fees, transparent costs, and constant communication. Our team was built with a mission to make sure both our and the client’s expectations are aligned. We set their expectations and we make them aware of how we provide service and how much are the costs.

Now, let’s continue. A while ago, we discussed what you should look for in a firm.

Conversely, you should stay away from the following:

Absolute fixed fee – The legal fee is the ONLY ONE that’s fixed. Searches are an estimated price because it’s a cost from the council which only they have control on.

Hidden costs – All costs related that will appear in your invoice should be laid out in your quote. Each search should be listed, defined, and stated with their corresponding prices.

Poor communication – Check for reviews. Only a few are able to maintain constant communication. As a client, when you ask for updates, you expect a reply. When you call, you expect to speak with your solicitor. If it’s not the case and you see unhappy clients, you better look around for other options.

How we provide Cheap Price

When looking for conveyancing companies, you’ll find our quote as one of the most competitive.

So how do we provide quality service at a very cheap price? It’s all about simplifying processes and riding the waves of technology.

Technology is designed to make our lives easier so adapting your business to it will reduce your costs. We also simplified by getting property lawyers only. This way, we cut costs and lower our rates making it affordable for everyone.

Why do you need Solicitors in Hervey Bay?

It’s no secret that a solicitor is always a better choice than a conveyancer.

So why is it wiser to get a solicitor over a conveyancer? It’s peace of mind and security.

You get both only from a well-experienced property lawyer. When you decide to go with a conveyancer, more often than not, it’s because their price is cheaper.

When there are disagreements, a conveyancer can’t protect you legally. You will then have to find a lawyer making you spend more than what you should have. Why? Because it’s more expensive to have a lawyer take over a job especially when it’s already less than 21 days before settlement. Dates have to be met and missed deadlines equal huge penalties. You may save now but you wouldn’t want to be crossing fingers through the course hoping nothing happens. 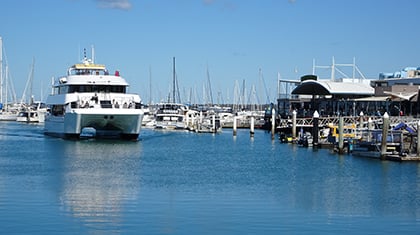 Hervey Bay is a municipality in the Fraser Coast Region of Queensland in Australia. It is situated about 290 kilometres or 180 miles or 3.5 hours of highway drive north of Brisbane,  the state capital. Open to the Coral Sea between nearby Fraser Island and the Queensland mainland, it is located on the bay of the same name. The local economy depends on tourism which is primarily based around whale watching to the north in Platypus Bay, accessible recreational boating and fishing, ferry access to Fraser Island, and the natural calm beaches with wide foreshore zones that are undeveloped. Hervey Bay was known as the First Whale Heritage Site in the world, in October 2019, by the World Cetacean Alliance, due to its practices of and commitment to sustainable dolphin and whale watching.

At times, tropical hurricanes are a threat with Cyclone Hamish threatening as a Category 5, in 2009. The land mass of Fraser Island notably affects the pattern of climate in Hervey Bay and protects the marine environment from storm effects. In 2013, Cyclone Oswald caused remarkable damage in the area, predominantly as a result of tornadoes produced by the system. For the year, the average rainfall is approximately 1,100 millimetres or 43 inches. The main rainy period is December to March, with May and June as secondary peak. The month of April is generally dry and sunny including months from July to November.

Scroll to Top
Got Conveyancing Questions?
Save Money On Your Phone Bill And
Request A Free Callback Now
Enter your phone number - and we will call you ASAP